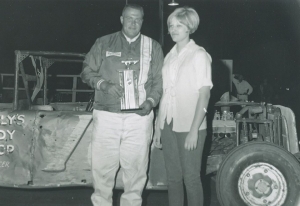 Dennis Hovinga was one of the hardest chargers to ever grace the racing surface in Kossuth County and across the Midwest. From the drop of the green, to waving of the checkers, his plan was drive hard and fast. It seemed that yellow and red flags (and a few black flags as well) never slowed Hovinga for very long.

During the course of 40 years (1960 – 2000) of dirt track racing, he was seen behind the wheel of hobby stocks, late models, and sprint cars before finishing his career wheeling IMCA type modifieds. While no one knows the total number of feature wins Hovinga has amassed in his career, it has been estimated to be in the neighborhood of 400+ feature wins.

Whether behind the wheel of his car, or piloting a racer for another owner,

Hovinga frequently found the winners circle. In addition to his own car, he drove for the likes of the Mills brothers (late model), Roger “Duke” Ducommun (modified), Joe Ringsdorf and Daryl Arend (modified).

He raced under the IMCA banner in 1988-1995 and with the NASCAR sanction from 1990-2000. He also raced extensively at the Algona, IA track under the NCAR sanction from 1989-1992. In addition to racing in Iowa, Hovinga was a force to reckon with in Nebraska, Minnesota, South Dakota, Arizona, Colorado and Missouri. He also was a member of Wayne Larson’s pit crew in the 1990’s during Larson’s ARCA efforts at Daytona and Talladega.

In addition to numerous track championships, he was the winner of many feature wins, including some of the biggest in the Midwest. Hovinga captured the modified Jackson Nationals trophy in 1989, along with the IMCA modified Iowa State Fair Race at the historic Des Moines track and the IMCA modified ‘Tour of the Northland’ event held in Alta.

He also lists the Wetherell Western Iowa Championship Series races in Denison and Harlan in 1991 and winning the late model/modified challenge race in Denison during the 1992 campaign as big wins in his career.

Hovinga was the winner of the very first Harris Clash race held in 1992 at the Hamilton County Speedway in Webster City, IA. Today, the Harris Clash is considered one of the top IMCA modified events in the country.

He was inducted into the Hamilton County Speedway Hall of Fame in Denny Hovinga1993. Hovinga is retired and resides in Laurens, Iowa.

Denny Hovinga will always be remembered as a classy guy! But one heck of a race car driver. RIP #10