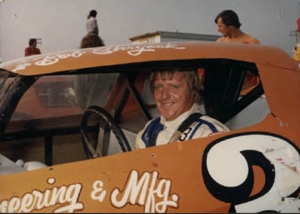 The late Bob Shryock’s roots to what was then called Kossuth Speedway in Algona, IA seem to begin with a handful of races during the 1972 racing season. By the time the ’73 season kicked off on May 31st, Shryock was poised to be a contender in Algona.

At the season opener, Denny Hovinga posted wins in the superstock heat, trophy dash and main event. It wasn’t an easy run for Hovinga, as Estherville’s Bob Shryock led the trophy dash until the last lap and finished second in the main.

Shryock again played second fiddle to Hovinga in the annual “Race Days” feature, in front of a packed grandstand that witnessed 38 superstocks battle.

By the time July of 1973 rolled around, Shryock was ready to turn the tables. During the annual Midwest Super Stock Car Championships, he held of the challenges of chief rival Hovinga and Dan Rurup to become the seventh different winner of the event.

Shryock kept the momentum going into August as the crowd at the Kossuth County Fair Championship race witnessed one of the closest finishes of the year. Shryock nipped Denny Hovinga at the checkered flag in the 20-lap main. Shryock started at the tail of the field for that race and two-thirds of the way through was second to Hovinga. At the checkers, Shryock slipped past for the fair race win.

In what become a precursor to many late model battles at the high-banked half-mile Fairmont Raceway, Shryock finished second to Hovinga in the 1975 Kossuth County Fair feature race and ahead of third place finisher, Burt, Iowa’s Bob Weber.

Bob Shryock Shryock, who worked most of his life as a heavy equipment operator, was working in Coon Rapids, MN when he was fatally injured in a construction accident August 19, 1985. He was 41 years old.

In his 17 years of racing, Shryock competed at more than 35 tracks in at least 10 states from Florida to provinces in Canada. He won at least 15 track championships, including multiple titles at Webster City, IA, Alta, IA and Fairmont, MN, plus one at Grove City, MN. He was also the inaugural champion of the four-track American Outlaw Association late model series in 1983.

He collected numerous special event wins; with the most notable being five wins and five more top five finishes in 11 attempts at the Black Hills Nationals at Rapid City, SD each fall. In addition to earning at least one major special event win at each of his regular tracks, Shryock won major events at Des Moines, IA, Eldon, IA, Omaha, NE, Hartford, SD and many others.

Shryock had driven many classes of race cars for more than 17 years and in 1985 he had begun a successful association driving the Smith Trucking late model out of Round Lake, MN, owned by Keith Smith. In their five nights of racing together that year, they accumulated two feature wins, two seconds and a third place finish. Also earlier that year, Shryock had driven his son’s IMCA modified to wins at both Webster City and Mason City, IA.

Three days before Shryock’s passing, Bob stood in victory lane at Fairmont Raceway, celebrating son Kelly’s first ever win, which came in the IMCA modified feature. The next night, at the Hamilton County Speedway in Webster City, Bob Shryock won in his final late model feature race, over Bob Hill.

Shryock is remembered for having a legitimate chance to win almost any race he entered. Nearly every victory lane celebration or snapshot featured his trademark grin. The nights that didn’t go as planned sometimes featured a quick temper. Fans also remember the bus used as a hauler and how family and crew all traveled together to the race.

He is remembered for his intense rivalry with Denny Hovinga, that spilled over at their regular tracks of Fairmont and Alta. Fans cheered for either Hovinga or Shryock…but rarely did they cheer for both.

It is interesting to note, that the intense Shryock-Hovinga rivalry perhaps traces many of its roots to that 1973 season at the Algona track; a season that saw either driver frequently stand in victory lane with the other usually in second. With both drivers in attendance, many racers where left feeling like they were running for third place.

Shryock is a 2003 inductee into the Hamilton County Speedway Racing Association Hall of Fame in Webster City, IA.

Bob will always be remembered as a champion! But most of all a great person who was kind and compassionate~!